The currency unit is the Rand, denoted by the symbol R, with 100 cents making up R1 (one Rand). Foreign currency can be exchanged at local banks and Bureaux de Changes. Most major international credit cards such as American Express, Diners Club, MasterCard, Visa and their affiliates are widely accepted.

Most restaurants do not add a service charge to bills - thus it is customary to leave a 10-15% tip. Parking and petrol station attendants should be given whatever small change you have available. This is always appreciated, even though it may seem a small amount.

There are 11 official languages in South Africa.

For the majority of foreign nationals who travel to South Africa for vacation, entry is straightforward and hassle-free. All visitors to South Africa must be in possession of a valid passport in order to enter the country, and in some cases, a visa.

To determine whether you require a visa to enter South Africa, visit the comprehensive South African Home Affairs Department website at http://home-affairs.gov.za

South Africa's electricity supply: 220/230 volts AC 50 Hz. Most plugs have three round pins but some plugs with two smaller pins are also found on appliances. Adapters can be purchased but may be in short supply. US-made appliances may need a transformer.

All visitors intending to drive are required to obtain an international drivers permit, visitors found driving without a permit will be fined and not permitted to continue on their journey. Visitors will also not be able to rent a car without a valid driver's permit. The wearing of seat-belts is compulsory and strictly enforced by law.

Many foreigners are unaware that South Africa has a well-developed infrastructure, high standards of water treatment and medical facilities equal to the best in the world.

In a great many medical disciplines, South Africa is a global leader. In fact, South African trained doctors are sought after all over the world, so this should give an indication of the standard of medical care available. There is a large network of public and private hospitals countrywide, offering excellent service. However, clients must have adequate health insurance to cover the fees private hospitals charge.

Malaria is found only in the Lowveld of Mpumalanga and Limpopo and on the Maputaland coast of KwaZulu-Natal. Malaria is not much of a risk in the winter months. Although the incidence of malaria is rare, it would be best to take adequate precautions if you choose to visit these areas.

As a rule, tap water in South Africa is safe to drink as it is treated and is free of harmful microorganisms. In hotels and restaurants, the standards of hygiene and food preparation are top-notch. It is safe to eat fresh fruit and salads and to put as much ice as you like in your drinks.

Visitors who are entering South Africa from a yellow fever zone must have a valid international yellow fever inoculation certificate. Only infants under the age of one year are exempt. Immunisation against cholera and small pox are not required and no other vaccinations are required when visiting South Africa.

Crime in South Africa, like many other places in today's world, can be a problem, but all you really need to do is take the usual sensible precautions and follow some basic safety rules.

South Africa has the oldest meteor scar in the world. The meteor plummeted to Earth nearly two billion years ago, predating the heady days of oxygen and multi-celled life. The Vredefort Dome was recently declared a World Heritage Site.

Most of the world's proto-mammalian fossils are found in the Karoo region - along with a 280 million year old fossilized shark.

According to recent studies, the star-watching town of Sutherland in the Northern Cape is one of the most geologically stable places on Earth, yet it has a 66-million year old volcano, not yet officially extinct.

Kimberley may have the biggest man-made hole in the world, but the southern Free State town of Jagersfontein has the deepest vertical man-made hole.

The only street in the world to house two Nobel Peace prize winners is in South Africa. Nelson Mandela and Archbishop Desmond Tutu both have houses in Vilakazi Street in Soweto.

South Africa, Zimbabwe and Mozambique are tearing down fences between the countries’ game parks to create a 35 000 square kilometers game park which will become the largest conservation area in the world.

South Africa is ranked number one in the world for its floral kingdom.

South Africa’s Coastal Management policy is one of the best in the world with the country being the first outside Europe to gain Blue Flag status for its coastal management.

The CONDE NAST TRAVELLER ranked Cape Town as the world's best value for money city two years in a row, as well as the most hospitable city in the world.

Discovery.com being an influential travel website has rated Clifton - Cape Town, as one of the top nine beaches in the world, calling Clifton: "sprawling and clean, reflecting the brilliant African sunshine off white sand and throngs of tanned bodies." 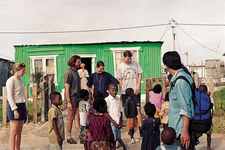